So I have been searching the DC metro area for cheese curds for a couple of weeks. The other night I went out to dinner with my friends Ryan and Melissa and they informed me that you can purchase cheese curds at Trader Joes.  This is awesome as it is right down the street. So yes, Trader Joes carries cheese curds in the DC metro area, if you were looking. Once I had my hands on the magnificent curds I only had one thought in my head, Poutine. What is Poutine you ask? It is a dish that is popular in Canada that contains cheese curds, french fries, and beef gravy. Well our Neighbors to the North (Canada) know how to pile on the calories in a single meal (roughly 1000 calories in a single serving). Sounds a little overkill, but it is completely amazing. 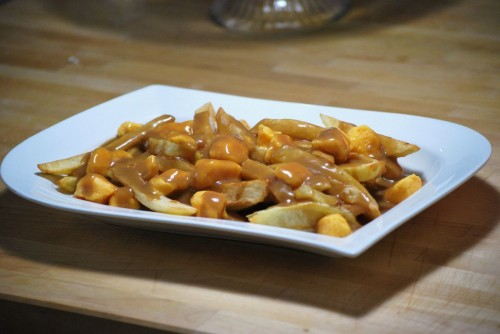 It is so tasty that you don’t need to count the calories. – It’s a free pass!!

The standard is white cheddar curds but all I could find were yellow curds. Tastes the same, just looks a bit different.

Start off by making your gravy.  It will take about 25 minutes.  Place the butter and flour into a sauce pan and stir for 6-8 minutes until you make a brown roux.

Then add the beef broth/stock  and bring to a boil.  Season with salt and pepper.  Once the gravy reaches a boil, turn down the heat to a simmer. Simmer for 20-25 minutes.

While the gravy is simmering, peel and cut the potatoes.  I like mine cut into thick strips. Once cut, place the potatoes into cold water.

Heat up oil in your deep fryer or on a stovetop dutch oven.  Heat it to 320 degrees.  We are going to blanche the potatoes in the cooler oil.   This will allow the centers to cook.  Blanche the fries for 3 minutes, 4 minutes if you made them thick cut.

When cooked, remove them from the oil and let them drain on a paper towel.  Now crank the oil up to 375 degrees.  When it is heated fry the potatoes until crisp.  Should take 4-5 minutes.

Drain the potatoes, season with salt and pepper and place on a serving dish.  Cover the fries with the cheese curds.

Now ladle the gravy over the fries and the curds.

The perfect appetizer for any meal.