I love breakfast.  Probably my favorite meal of the day.  Mostly because it is the only meal where it is cool to eat bacon straight up.  But secondly, because it is almost always served with potatoes.  I love those crazy tubers.  So I decided to whip up some potatoes.  These potatoes are loaded with peppers and onions.  They are almost a breakfast on their own. Heck, top with an egg and you are good to go.

While the potatoes are cooking dice the peppers and onions into bite sized pieces.

When the potatoes are cooled dice them up into bite sized pieces. 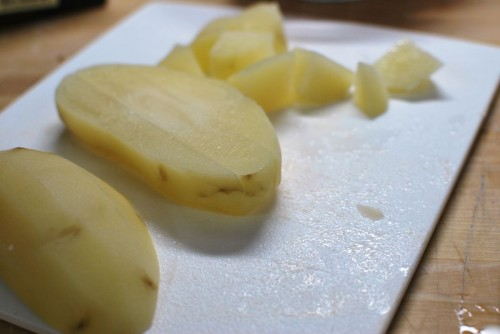 Heat a large skillet to medium/high heat and add the vegetable oil.  Toss in the peppers and onions and cook for 5 minutes or until the onions and peppers soften.

Add the potatoes and the seasonings. Cook until the potatoes are golden and crisp, roughly 10 minutes. Serve as a side to your favorite breakfast dishes.