This Wednesday I will be competing on the American Grilled TV Show on the Travel Channel.  The show airs at 9PM est.  If you watch the Travel Channel this week you will see some commercials for the show.  If you are look closely, you may be lucky enough to see this nice looking mug featured in the commercial. 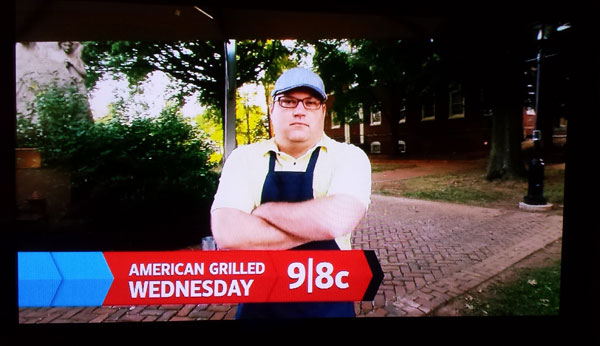 Here is a quick little preview of my episode.

Host David Guas travels to the home of Thomas Jefferson – Charlottesville, Va. Besides being a celebrated university town, Charlottesville is also known for its budding food scene, local wine and rich culinary history.  Virginia is a leading pork producer and this episode is all about the pig!  Corey, Rex, Jim and Richard go hog wild, battling to take home the $10,000 prize at Jackson Park (part of the Virginia Civil War Trail) using ingredients like marmac cheese, Virginia wine and some rather “curious” cuts of pork. Guest judges include Lisa Bacon, a Virginia-based food writer and editor, and Famous Dave Anderson, owner of the BBQ chain Famous Dave’s.  It’s a high-heat, high–intensity, battle for the cash and hometown pride.

The show was a blast to film.  Hope you guys can tune in to watch.